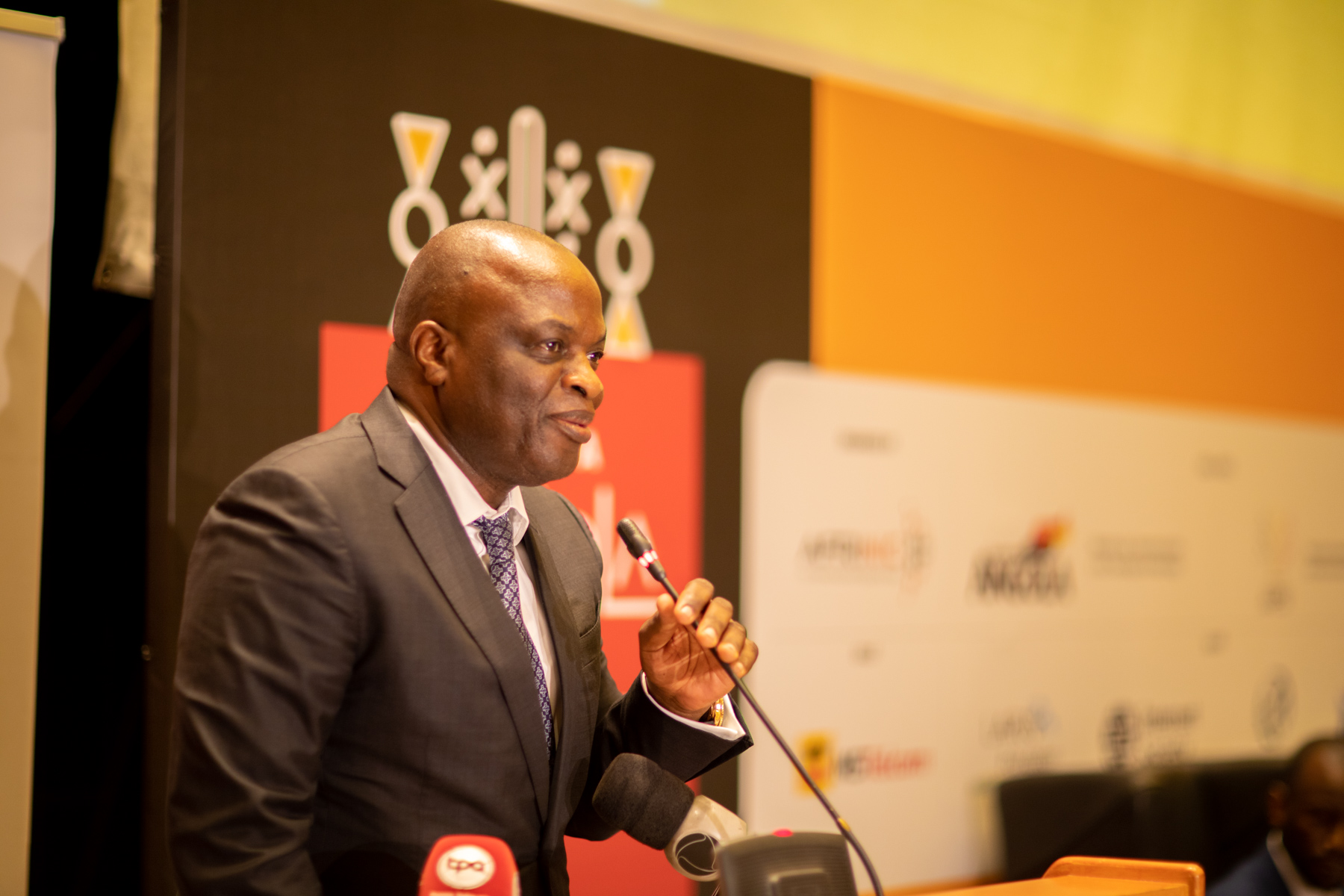 Tuesday, 3 December started with the Opening ceremony not only to welcome delegates to Luanda but to the meeting. 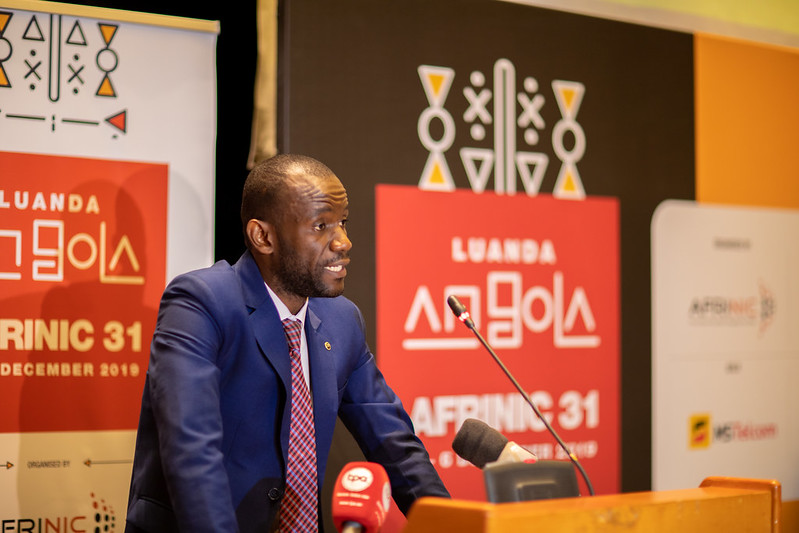 Mr Christian Bope, the AFRINIC Chair stressed the importance of embracing IPv6 as Africa seeks to join the rest of the world in advancing Internet connection in the face of IPv4 exhaustion. Mr Bope introduced AFRINIC's new CEO Eddy Kayihura to the AFRINIC and African and global Internet community. Eddy took to the floor to tell the gathering what AFRINIC has achieved in the last 15 years of its existence, and its ambition to digitally light up Africa. He particularly focused on the need to connect Africa to the rest of the world through an efficient, affordable, and reliable Internet. Eddy paid tribute to Internet pioneers at the meeting, namely Dr Nii Quaynor and Mrs Maimouna Diop. The two elders, among other members of the pioneering AFRINIC council of elders, played a critical role in the founding of the organisation. Eddy mentioned his predecessors for helping lay the ground for the success of the organisation. He thus recognised the roles played by two former CEOs, the founding head Adiel Akplogan (2005-2015) who was in September inducted into the Internet Hall of Fame, and the immediate former chief Alan Barrett who served from 2015 to 2019. He also recognised Alain Aina, another AFRINIC pioneer, for his service to the community and for being awarded the Jon Postel Award for 2019. 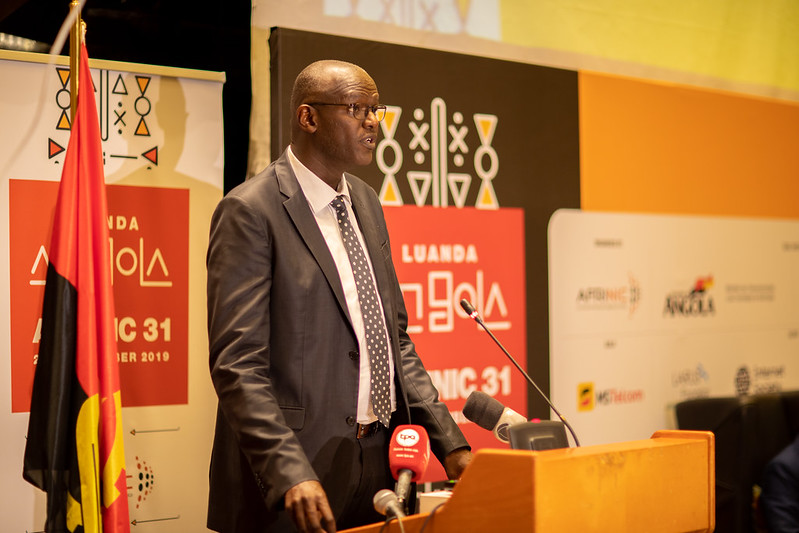 José Carvalho da Rocha, the Angolan Minister for Telecommunications and Information Technologies, talked about his government's commitment to Internet development and its contribution to socio-economic development. He also talked about AFRINIC role in the promotion of Internet through principles of equity, partnership and collaboration.

The Minister emphasised the need for multistakeholder participation as an essential and critical element in the success factor in Internet development. He pointed out the need for an ICT strategy that works for all irrespective of their station in society. 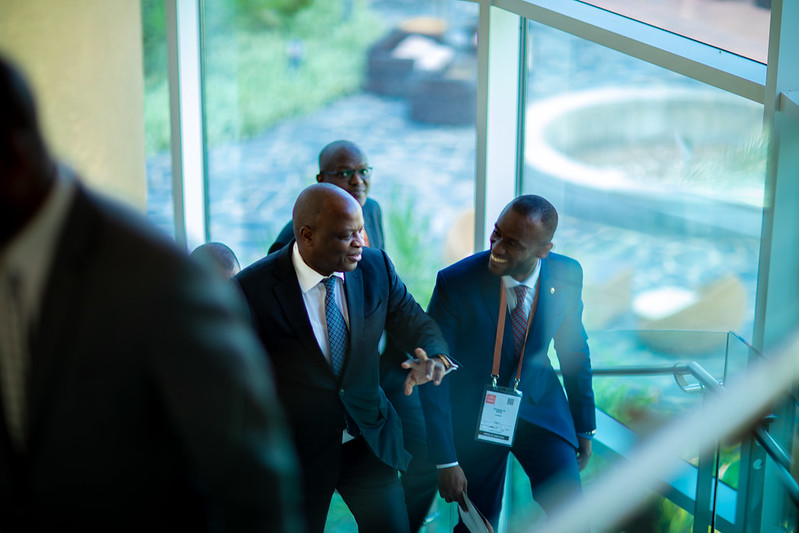 At 11:00, a panel moderated by Dewole Ajao discussed the Internet connectivity landscape in Angola and IPv6 deployment.

In the presentation on Connecting Africa to the World, Silvio Almada, a pioneering Internet actor in Angola and Africa, highlighted the elements that made Internet connectivity a success following investment in fibre optic and satellite infrastructure in the continent.  Almada paid tribute to various international organisations that contributed to Internet in Africa and the pioneers in Africa that played a major role in creating the African Internet ecosystem. In the presentation, Almada detailed Internet milestones in Angola and the role of the Angolan Internet Association played in the advancement of Internet advancement in Africa. 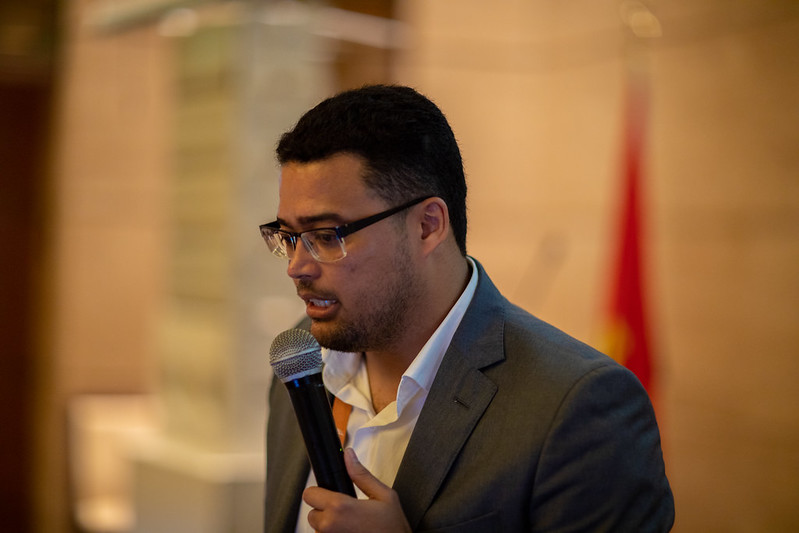 Darwin Da Costa's presentation presented insights into the telecommunications sector in Angola with relevant statistics on registered ASN(s), data centres, subsea cables, IXP(s) in Angola, and Interconnections ecosystem including the IP addressing evolution and adoption. The presentation also took a deep dive into the existing subsea systems, the impact on the digital economy, the development, and challenges. Activities of the Angolan Peering Forum and Angolan Network Operators Group were highlighted during this presentation. 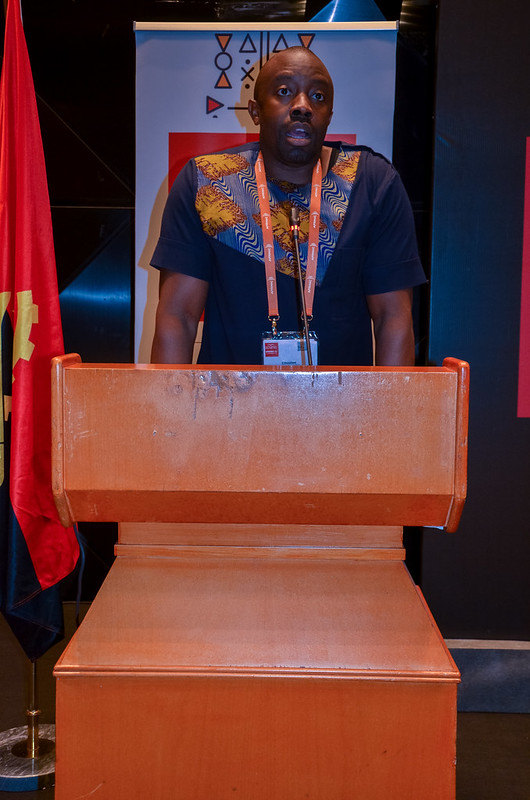 The last presentation of the panel was made by Jordi Palet Martinez. He explained how NAT64/464XLAT can be deployed in an IPv6 network and the possible optimisations. He focused on solutions to the issues to be considered when having IPv6-only connectivity, such as DNS64, applications or devices that use literal IPv4 addresses or non-IPv6-compliant APIs, and IPv4-only hosts or applications. 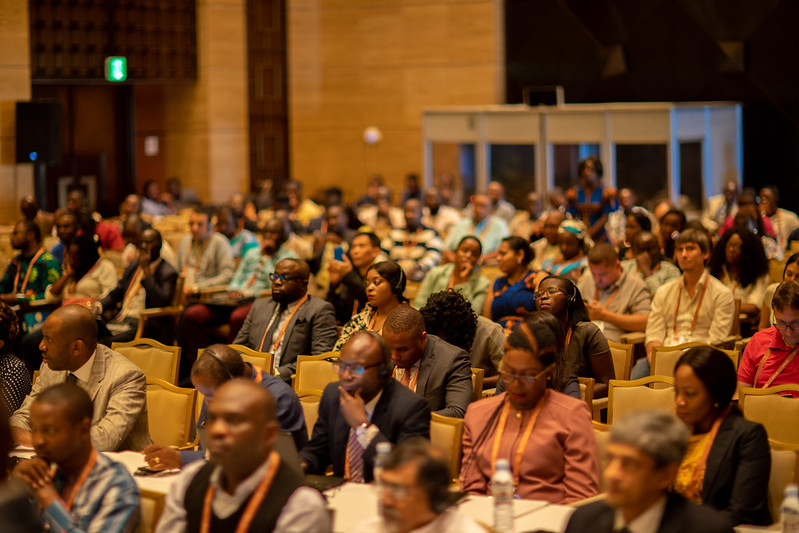 During the day, Jorge Cipriano also addressed the audience on MSTelcom's journey on adopting cloud services and its business value. Thereafter, Darshak Thakar provided updates from M3AAWG meetings, committees’ work, and regional work with industry partners. This included insights into some of the solutions being worked on in the areas of messaging, IoT, and mobile security.

The final presentation by Brice Ndange highlighted the activities of CSIRTs in Africa. 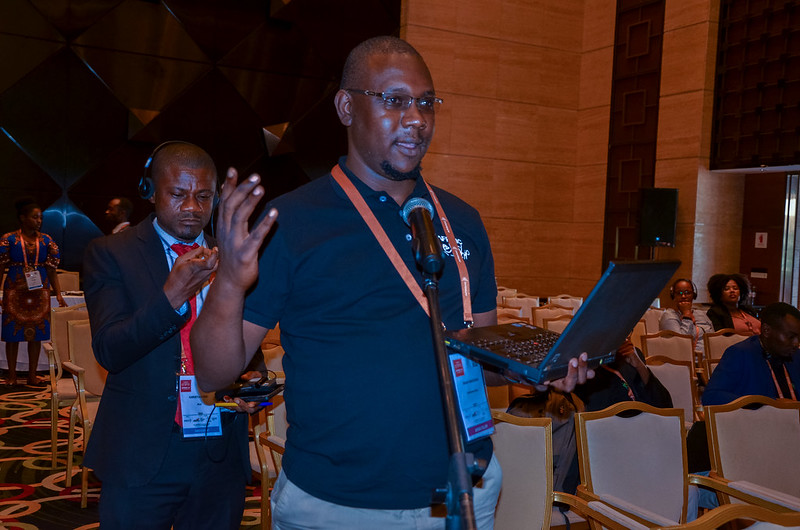 The session on Universal Acceptance (UA) examined domain names and email addresses work in any web browser, email client or other Internet application on any computer or electronic device. The session, led by Yaovi Atohoun, focused on the concept by ICANN Org, the Universal Acceptance Steering Group and how the community can contribute” to it”

The presentation by Danny Afahounko addressed developments in the IT landscape with particular focus on emergence of coud computing. The entire IT world keeps evolving, moving "slowly" from our traditional vision of the IT to "everything as a service ... everything as code", Afahounko said. This represents an opportunity for Africa to strengthen and improve its infrastructure and bring in new ways to think, design and build cloud computing based infrastructure.

The AFRINIC-31 Welcome cocktail was held at the HCTA. This was a great opportunity to mingle and network with peers while relaxing with a drink in hand. 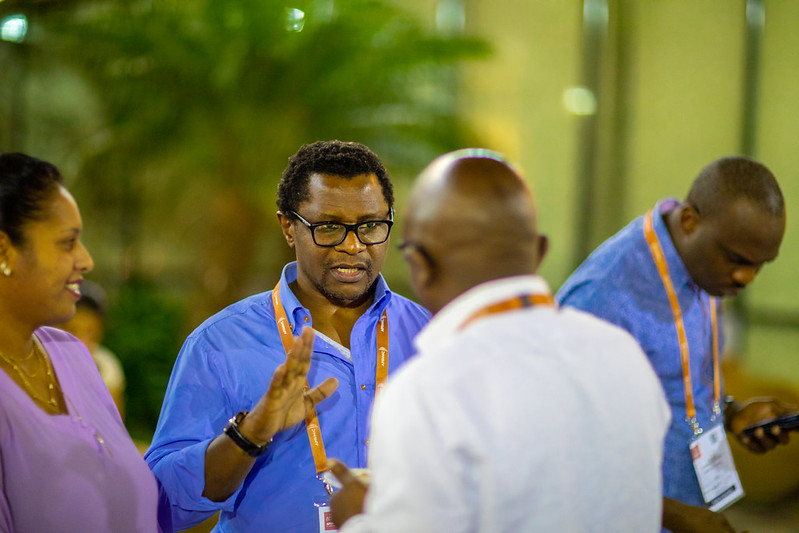 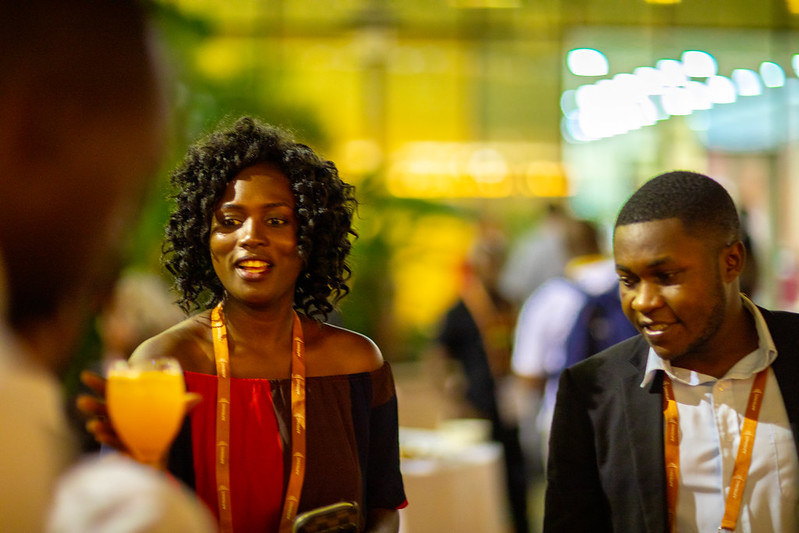 AFRINIC-31 delegates during the welcoming cocktail

We invite you to join us tomorrow for the official Policy Discussions at 11:00 (AUT).

We also remind you that you can visit the AFRINIC booth, where we will be providing information about AFRINIC services and activities, throughout the week;

Stay tuned for our daily recaps!

Thanks for reading, and staying tuned.
The AFRINIC Team.